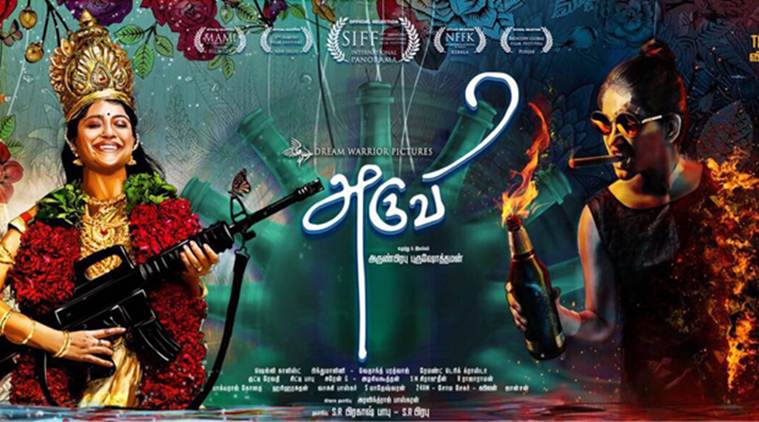 How do you review a movie like Aruvi? As someone who strongly believes that reviews should be spoiler-free, Aruvi is a movie that makes me want to break my own rules. For it is a movie that hits you so hard that you want to talk about everything in the movie, in detail. Aptly named Aruvi (waterfall), the movie is a cascade of emotions: laughter, tears, anger, loneliness, the film has everything in a neat package. It is a struggle to find a beginning point when a film has almost everything working in its favour.

Let me start right from the beginning. We get flashes of the eponymous Aruvi (played by a brilliant Aditi Balan, more about her later though). Shots of her nose, eyes, chin — the different parts of her face are clearly in focus. It is like a jigsaw puzzle where we get through the bits to make sense of the larger picture. The first half of the movie is framed in a similar fashion as we try to figure which bit of Aruvi’s life we are now witnessing. We see Aruvi’s innocence, feistiness, anger, happiness all a bit too close before we are pushed back to see the larger picture. In a brilliantly written interval sequence, we begin to understand her reasons. Why does she go to an over-selling talk show seeking justice? How did she befriend a transgender? Where does she get the courage to say ‘kai vei papom’ (touch me if you can) to an interrogating special force officer? It is all there. This year truly belongs to the debutant directors and Arun Prabhu Purushothaman finishes the list in style. His writing is gold. Even when the film slightly takes a preachy tone, the authenticity in his words keeps you hooked. He makes his protagonist find solace with three people who ruined her life and yet, you don’t blink an eye. Forget Balachander’s complicated relationships, this one takes the cake. Yet, you don’t question her choices. That’s the success of Arun’s writing.

When a film takes on a sensitive subject, the story generally steals the spotlight from the craft of the film. Aruvi, on the other hand, is technically sound. There is a excellently staged screen where Aruvi plays a game of ‘Truth of Dare’ with her captives. The scene is staged like a courtroom; Aruvi’s spin-off of a trial where she is the self-anointed judge. Humour creeps into the most unlikeliest places in Aruvi, like in this sequence. How we meet a person and where we meet them is integral — it is the circumstances, not their personality, that seals effective friendships. Raymond’s nifty editing, especially in the first half, and the effect non-linear narrative conjures is almost poetic. Bindhu Malini and Vedanth Bharadwaj’s music acts as another narrator for Aruvi. Each song signifies the end or beginning of a chapter in her life, seamlessly interspersing through the narrative.

It would be blasphemous to not mention the performances in Aruvi. Arun’s move to cast newcomers is smart. Without the baggage of previous appearances, every performance is fresh and adds more authenticity and flavour to the narrative. And boy what a find Aditi Balan is. She has probably got one of the most layered roles written for women in Tamil cinema. With a cheeky smile and a striking screen presence, Aditi has breathed life into the various shades and hues of Aruvi. Her monologues, especially the one before the climax, are breathtaking. This is indeed a dream debut for Aditi.

A well-deserved shout out to the producers Dream Warrior Pictures. It says something when some of the year’s best and most unconventional movies (Maanagaram, Theeran Adhigaram Ondru and now, Aruvi) are bankrolled by the same brand. I genuinely hope the streak continues, it would bode good for us.

Watch Aruvi in the theaters. However here is a warning. It is not for the light-hearted. If you’re the person who wants cinema to speak to you and move your soul, Aruvi is the film for you. If you are the person who believes cinema is for mere entertainment, watch Aruvi. It might just make you believe otherwise.