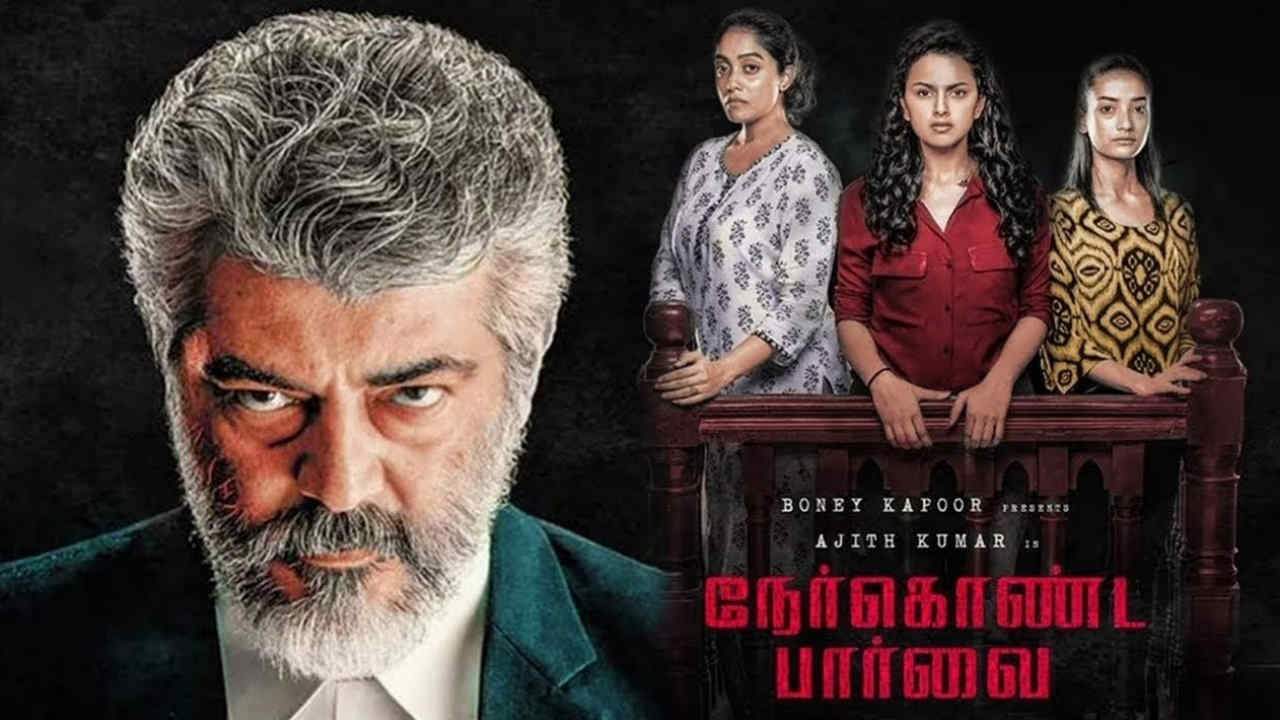 I have to confess that Nerkonda Paarvai was a remake that I was apprehensive about. Pink was a powerful film that spoke about the importance of consent, simultaneously calling out the double standards society has set for women. It had Taapsee and Amitabh Bachchan but wasn’t a star vehicle, if you know what I mean. Placing Ajith, one of Kollywood’s biggest stars, in a film like this brought several questions. Will the core of Pink be diluted to accommodate the commercial expectations of Ajith’s fans? Will the spotlight shift from what is being said to who is saying it, ie the star?

Probably the first time I am glad, and relieved, saying this but Nerkonda Paarvai IS a fairly faithful remake. The film, for the most part, sticks to the struggles of three women — Meera Krishnan (Shraddha Srinath), Famitha Banu (a surprisingly effective Abhirami Venkatachalam), and Andreah Tariang; A drama where a lawyer helps three women claim their narrative in court. Despite knowing the story and its premise, the Tamil dialogues hit hard. It is terrific how Vinoth has created whistle-worthy punchlines from seemingly normal dialogues. Of course, there is the ‘Apdiyelam Nadakathu. Nadakakoodathu’ from the trailer. But my favourite one is where Bharath Subramaniam (Ajith Kumar) rubbishes two of the most used ‘proverbs’ — ‘Oosi idam kudutha than nool nuzhaya mudiyum’ and ‘Selai mull mela pattalum, mull mela sela pattalum, badhippu selaiku than.’ Namma eniku oosi kita ketrukom, asks Bharath. He further goes on to add that women aren’t objects, like needles and threads, but humans with emotions and more importantly, rights. And her no always means no, without any ‘conditions’.

H Vinoth has tried hard to get the balance right. Bharath Subramaniam (the name is an ode to Subramaniya Bharathi, from whose poem the title has been taken) isn’t the superhuman we usually see Ajith play on screen. Let’s just take the introduction scenes from Viswasam and Nerkonda Paarvai, shall we? The former had a sequence that spanned several minutes slowly building up to the final reveal of the star’s face. Bharath gets nothing of the sort. He is just sitting on a park bench, looking straight ahead, not paying attention to his surroundings. This is an Ajith we haven’t seen in a while on screen, and wish to see more often. Grounded and solid, Ajith’s sheer presence adds volumes of legitimacy to the character. Vinoth keeps his commercial additions to the bare minimum and makes some smart decisions as well. Vidya Balan’s exuberant charm sells a generic flashback. Even the rage and violence that Bharath exhibits in the action sequence has an explanation — even though it’s not exactly the best one out there.

Yes, there is an extra flashback and a fight. Are these necessary to the story? Definitely not. Does it push the narrative to meander a bit? Maybe. But is it a price I am willing to pay to see the crowd react the way it did during Nerkonda Paarvai? I would say yes. One of the major ‘problems’ with Pink was that it was pegged as ‘multiplex film’, and consumed as one. As a colleague succinctly said once, it preached to the choir. Nerkonda Paarvai’s biggest challenge is to break all such barriers; an Ajith film has to reach the masses, satisfy his fans. To hear the audience cheer at all the right moments, especially at some of the terrific dialogues in the second half, was worth every commercial compromise that the team had to make. For Pink, and Nerkonda Paarvai, deliver an important conversation to our living rooms. If more people will give Nerkonda Paarvai a chance because it has Ajith in it, I would gladly take an extra song or a fight sequence as the price to pay for that.

The film’s premise and theme make it the kind of film where you don’t want to dwell on the flaws and just be glad that it exists. It does have few rough edges, like its portrayal of a mental health condition. I found the consistent tautness in Shraddha Srinath’s performance a tad underwhelming, compared to the beautiful mixture of strength and vulnerability that Taapsee brought to the screen. And there’s also the film’s insistence on verbal dissent and cues, which I won’t problematise. In a time, where women still get referred to as ‘idhunga’ and are slut-shamed for their lifestyle choices, one can’t expect the larger society to transform overnight into discussing greyer areas of communicating dissent. Baby steps. Hopefully, we’ll get there soon enough.

I read that Ajith was one of the main people who rooted for Nerkonda Paarvai to happen. It mustn’t have been an easy decision — to let go of all commercial logic, step out of his comfort zone, and take a sensitive, nuanced, issue-centric script to the larger audience. Which is why I want Nerkonda Paarvai to earn money, satisfy fans or do everything that would deem it a success. If this film succeeds it would be a concrete example of how commercial films necessarily need not be only masala entertainers — that stars are allowed to experiment, get out of their creative gold prisons once in a while. Rajinikanth did it with Kabali and Kaala. Now Ajith has upped the game. Will other stars follow suit?