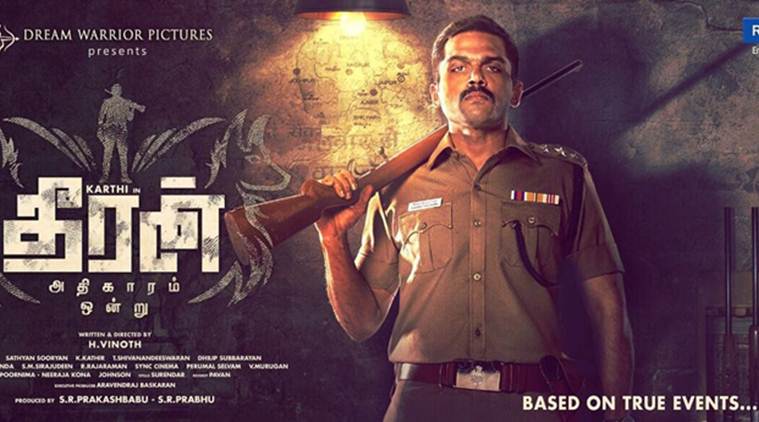 When Sathuranga Vettai released in 2014, the word dark horse was used to describe it a lot. The sleeper hit of the year, Sathuranga Vettai took everyone aback by its fresh content. And, the man behind it, H Vinoth is back with Theeran Adhigaram Ondru featuring Karthi and Rakul Preet Singh. Ironically, while his first film was about a con man, Theeran is about an honest police officer. “It wasn’t planned. The initial idea was to do another con movie as Sathuranga Vettai’s dialogues were much appreciated. That didn’t happen. This was a story that reached me through destiny,” says Vinoth. As the director dug deeper, he realised that there was a lot more than what met the eye. “When we browse something, we click one piece which leads to another, that leads to another and so on right, this was the same way. The more I read about it, the more I had to learn. I was scared at a point as to how I am going to translate all this into a movie.”

Vinoth also was sure that he wanted a star for his story. “I wanted the film to not be alienated. It should reach everyone.” But that also meant meeting the expectations of the star’s fans. “There was a need for elements like romance. I wanted women to come to the theaters as well. So I wanted to make my film as a package of these things.”

The director also says that he felt Karthi was the right fit for the story which happens from the year 1995-2005. “The story needed a person who would do anything for the script. Our geography has become so globalised that we had to go to a remote place near the border to shoot. So the climate conditions would be extreme.” Thus he needed an actor who would be ready to do anything for the script. “Karthi has already done such work for Paruthiveeran and Ayirathil Oruvan. He is a person who will compromise for the script and not expect the vice-versa. Thus I felt he would be perfect. Also, he has essayed the role of a police officer.”
In fact, the director also divulges that Theeran Adhigaram Ondru’s script was written for Karthi. When he had initially approached the actor, he just had an outline of the incident. “He asked me to go ahead and write a script and told me that he will do the film if he likes it. I wrote a commercial version for him and he liked it,” shares Vinoth.

Ask Vinoth why he chose to do a commercial movie, he says that Sathuranga Vettai was commercial as well. “Everything that is being sold is commercial, right?” asks the director. He says it is rather about telling the story differently. “When the same thing is said over and again, we get bored. It is just changing the format, like selling a soap or a chocolate with the tag ‘new’ on it. Even Sathuranga Vettai has its set of cliches; at the end, the bad guy turns into a good one.”

Interestingly both of Vinoth’s heroes share a similar trait; battling against their perceived identities. If Sathuranga Vettai was about a conman who crossed over to the good side, Theeran is about an honest cop, and honesty is a tag that is not popularly associated with policemen. “People have a strong grip on morality. They believe that makes their lives run smoother. When a film breaks that they get scared,” says Vinoth. However, the director personally doesn’t believe that effective change can happen overnight. “But when I don’t have the space to change it, I believe that I shouldn’t spend time battling it. The process will happen slowly. Films should inject that change gradually. If you make a drastically different movie all of a sudden, people won’t enjoy it,” reasons Vinoth.

“My films should raise a negative question in the audience’s mind. In Sathuranga Vettai, the question is ‘when one needs money for everything, from good education to good healthcare, why can’t he do anything for it?’. My desire is to raise such questions in regarding the sociopolitics of life in the minds of my audience.”

Theeran, Vinoth claims, tries to portray the department as accurately as possible. “At the same time, we have made sure it is controlled and not preachy. There are a lot of things that will be new and surprising,” he states. “The viewer will be able to learn a lot from the film. If one starts digging a bit with what the film says, they will get even more history. If you can forgive a few cliches, Theeran will be a new experience,” he asserts.

Theeran Adhigaram Ondru has a few real-life officers playing roles in the movie: an ex-deputy commissioner and a fingerprint expert along with a few others. “Ex-DCP Siddhan is a person who has written books for the police department. His books provide the theory for police officers to practically handle cases. I happen to come across this book and I reached out to him. When I told him that I have done a movie, he said he will check it out and get back to me. He liked Sathuranga Vettai and called me back. I started talking with him and he gave me a lot of information to work on,” says Vinoth.

Guess what, the name Theeran Adhigaram Ondru wasn’t kept as with the intention of a franchise. “Theeran is a noun. And there are many chapters in a cop’s life: love, life after marriage, professional life etc. The collation of such chapters is called an ‘Athigaram’ in Tamil. When we say Theeran Adhigaram, it didn’t sound complete. So we added ondru,” says Vinoth. However, he adds that there is a lot of scope for a sequel. “Even if I don’t do it, making the second part of the third part is easy as it involves crimes,” says Vinoth.

During a time where commercial movies have heroines just as dramatic relief, ask Vinoth if Theeran Adhigaram Ondru would join the list and the director says yes with surprising candour. Would he do a women-centric film in the future? “If I get the complete freedom to do a movie, there are a few genres that haven’t been done in Tamil that I would like to do. There are many directors who start out with commercial movies, thinking later they’ll get the space to do what they want to. But they never get that as they are easily labelled. Even with me, people ask me if Theeran would be dialogue heavy because the dialogues in my first movie were good. But, if I can create that space, I will definitely do one,” said Vinoth.