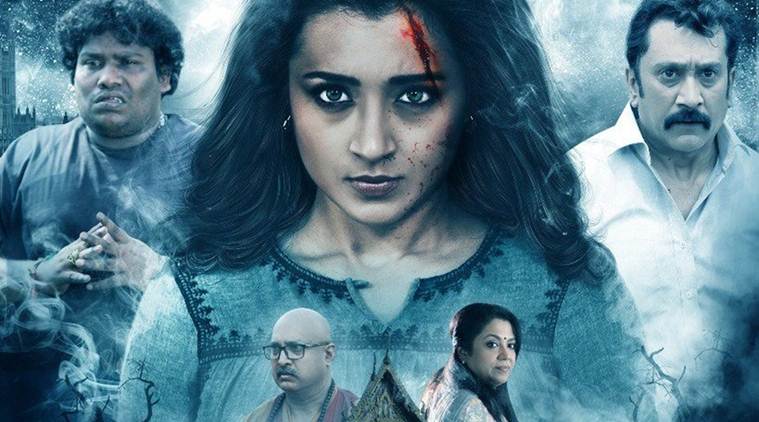 There was one moment where I thoroughly enjoyed Mohini. Unfortunately, it came after the film ended. As we were watching the end credits, someone walked in and asked ‘Oh, idhu pei padama?’ (Is this a horror film?) and the few of us who were still in the theatre burst out laughing. It was a rare moment where a common emotion unanimously linked the audience. I was dearly praying that Mohini had at least one such moment that saved the film. But we weren’t lucky. Not even a ridiculously beautiful Trisha can save this film.

Thanks to KTV, I grew up watching up a lot of Amman films — Thaali Kaatha Kaaliyaman, Amman, Palayathu Amman, Rajakali Amman and some more. The best metaphor I can use for Mohini is that it is an Amman film set in London. The ‘progressive’ step that Mohini takes is that it covers multiple faiths. The hero and heroine are saved as a united effort across religions. But someone has to still die as part of a ‘Narabali’ (human sacrifice). Sigh. There is some mumbo-jumbo thrown at us in the name of ‘science’. I am no science expert, but transgenerational epigenetic inheritance gives more strength to the ghost? Seriously? More outdated regressive practices come up — there’s a Kuruthi poojai as well (Kuruthi means blood in Tamil).

I was wondering why Trisha accepted the role. Is it because she gets to play a ghost? But she did that in Aranmanai 2. Maybe a dual role, only that there isn’t much duality here. Was it because she actually got to play a new-age revenge seeking goddess? That angle also doesn’t add up right as Mohini seems to have priorities mixed up. She takes up Vaishnavi’s (Mohini’s so-called DNA link) body because she wants to live. She doesn’t care about killing Vaishnavi. Mohini’s life met a premature end as she worked for a just cause. Okay, let’s work on that premise. Even then, her revenge threatened to claim innocent lives that were completely not linked to the crime that had been committed. And suddenly she becomes a protector against abuse? *Taking deep breaths*

Mohini could have been more fun if she had gotten to thrash up some men for real. It would have been fun to see Trisha perform some actual stunts. Here the acrobats are the deceiving cameras, harnesses and VFX.

The entire script suffers from the disease of superficiality, apart from the fact that it is woefully outdated. However, Mohini achieved one remarkable feat. It made me feel like I was in the 90s all over again and instead of feeling younger, I felt like I had aged an eternity as well.