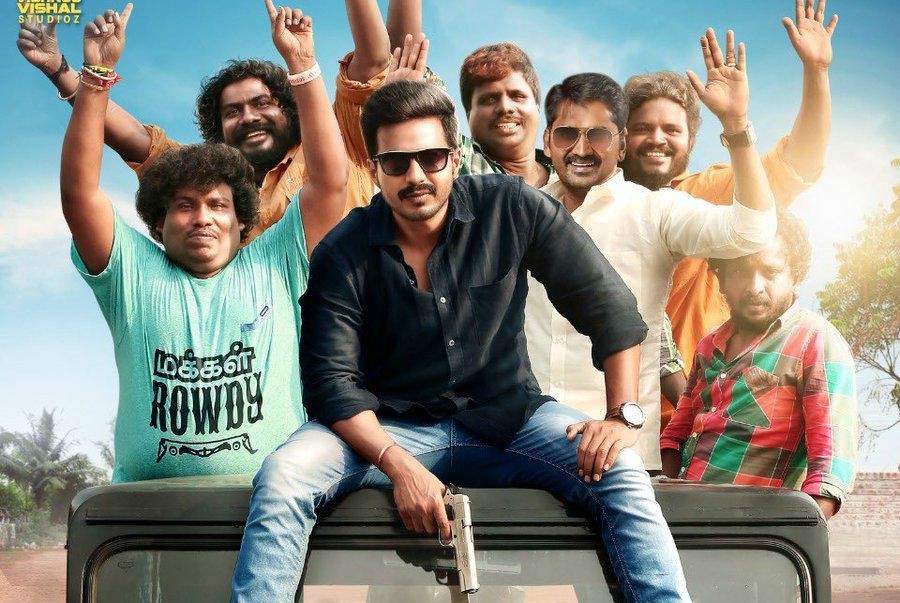 There are several tags that Kollywood uses to classify its films. The most exasperating of the lot has to be, ‘a fun, family entertainer’; especially when most of the films that come with this tag are neither fun, nor entertaining. Vishnu Vishal’s Silukkuvarpatti Singam is the latest to join this illustrious list of comedies that attempt to operate on the Sundar C formula from his Ullathai Allitha days — some mindless attempts at humour with a chaotic climax. This template has been refurbished so many times that Sundar C himself should considering putting it to rest (given it still brings us films like Kalakalappu 2). And yet, we continue to get films with different characters that revolve around the same-old structure.

Silukkuvarpatti Singam is the story of a scaredy-cat cop, Sathyamurthy (Vishnu Vishal). His name is probably the biggest joke in the film, considering that he lies through his teeth to almost everyone. According to the rules of Tamil cinema, the hero obviously has to fight against a ‘massive don’ and we are introduced to Cycle Shankar. How Sathyamurthy’s path crosses Cycle Shankar’s and whether he manages to gather the courage to stand up to him, forms the crux of the story.

To be honest, this film doesn’t fare too badly on the outrage metre. Unlike, say Thimiru Pudichavan or Billa Pandi, I wasn’t enraged enough to kill someone when I walked out of the theatre. In fact, I managed to have a few laughs as well. However, the humour is extremely problematic at certain points. A gang of men, including Singam Puli, get arrested for causing a ruckus at a bar. The wives of these men arrive at the station the next day, asking the police to jail them for at least a year as their alcoholic husbands come home and torture them every day. The police say they can hold them for a year based on a nuisance case and then one of the wives says, make it a rape case as that is what they do every night. In isolation, this is a step of agency but with the caricaturish writing, marital rape is now just a joke. How are we supposed to laugh at something that has been at the middle of an intricate, layered debate?

Forget the problematic. I pity the women who inhabit these films. Even the normal scenes don’t show the women in a respectable light. As always, the heroine (Regina Cassandra) has nothing much to do aside from looking pretty and showing off her nice clothes. To woo her, our hero uses students to deliver love letters. In the present climate of insecurity and crime, the age-old concept of using child messengers becomes a question of concern. But come on, it is just a fun film. That inherently means that we should brace ourselves for a rehash of the same old jokes for the nth time.

On the brighter side, (yes, thankfully there is one), we have a brilliant Yogi Babu with an unending collection of funny retorts. The comedian du jour adds his own effervescence to the age-old villain sidekick role, that makes his act more enjoyable than the main villain. His dialogues are effortless, and for the most part funny. Vishnu Vishal is consistent and earnest in his performance as the self-centred cop who smooth-talks his way out of sticky spots.

Considering that I haven’t been enamoured with many ‘commercial movies’ of late, I saw Silukkuvarupatti Singam as an opportunity to cut loose, set aside all my opinions of mass cinema and have some fun. However, the film left me completely unaffected. I couldn’t even muster the strength to cry foul at several things in the film. Then I remembered that I shouldn’t be working myself up over it. After all, this is a fun film. Isn’t it?

This was first written for The New Indian Express. You can find it here.